Assignment 4: Where I'm From Poem/Prezi 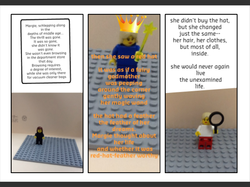 Mark Twain, Elliot Engel, and Me

Looking at Mark Twain’s picture, I immediately see the resemblance: wild eyebrows.  However, I slick mine down whereas Twain flaunts his.

Which makes me wonder how else our life experiences are similar or different, and how do these experiences affect our writing?  Another player in this drama is Dr. Elliot Engel, whose writing is my source of information about Twain.

Engel certainly understands Twain’s demanding speaking schedule.  Engel’s biography on his Author’s Ink website (http://www.authorsink.com/about-dr-elliot-engel/) notes that, “In his spare time, he enjoys reading, walking, and vacationing in exotic locations where he is not asked to deliver even one lecture.”   I myself keep a demanding “speaking” schedule by teaching middle schoolers year round—an occupation that requires our next commonality, humor.

Engel, Twain, and myself use humor in our speaking and writing.  When my children were in middle school, we attended Engel’s lecture on Dickens at our local eastern NC library.  We were hooked!  From then on we sought out Engel’s amusing, insightful lectures as the treasures they are.

Acknowledging that Twain’s life resonates with Dr. Engel, we plunge into the understanding Engel provides for us about “the greatest American writer to ever pick up a pen.”  Mark Twain spent much of his life concerned about finances.  Even though his father never made a decent living, things got even worse when Twain was twelve years old and witnessed his father drop dead.  From that point on, all the Twain children worked to provide for the large family.  Twain’s masterpiece Huckleberry Finn is about a poor teenager not unlike himself.

Contrast with my own writing.  I grew up in a family where my Daddy was known as an excellent provider.  Only this year did I truly internalize the fact that money is finite.  Having my Daddy and then my husband take care of me for most of my life, I falsely assumed that money I spent would magically be replaced.  My writing up until this year usually has characters grappling with concerns other than financial, but now as I face retirement on my own, my characters are beginning to consider financial questions too.

Like Twain, I’ve had “impossible” jobs: soul sucking, stroke-inducing, exasperating.  Tom Sawyer cleverly avoids work by conning his friends to paint the fence for him; Huckleberry drifts down the river, never having to do Twain’s tedious work of extracting the correct letters from cases and setting into 6 pages of type; my own characters have historically not had to work for a living, but that is changing too, as I choose to create characters who either refute or reflect my own experience.

Twain and I share an entrepreneurial spirit, as well as a penchant for screw-ups in our business plans.  My husband and I thrilled to buying the territorial rights to sell decoupaged pressed wood plaques (who wouldn’t want these?!) across North Carolina; we also tried our luck at a house building business; both of these enterprises ended after a few months of negative revenue.  Twain seeks gold but finds mud; Twain’s two-year investment learning the Mississippi River concluded in no revenue because of the Civil War.  But his knowledge of the river gave authenticity to Life on the Mississippi and Huckleberry Finn, as well as providing our Samuel Clemens with his pen name, a term that indicated to the crew of the riverboat that the water was deep enough for them to dock.  Mark Twain therefore sets up his readers to expect “good times ahead”, just upon hearing his name.  I see now that all my experiences, especially the ones that went awry, are elements for fanciful, fabulous tales.  I may even use different pen names for different aspects of my writing: Hollis for my childhood adventures, Arabella for my most proper self, Genevieve for my wise old age?

Although Twain had his entrepreneurial fiascos, he did have a brilliant response to Louisa May Alcott’s getting his Huckleberry Finn banned in Massachusetts.  Rather than quietly bemoaning her powerful influence, he capitalized on the Victorian public’s pent up desires by taking out ads explaining in bold letters that it had been banned “FOR ALL ITS DIRTY INCIDENTS”—upon which, sales shot up 300%.  Dr. Engel’s sales pitch for his dvd’s reveals his marketing genius—I wanted to buy them, I like him, my life will be richer for having them!  Hopefully my marketing genius will kick in and provide income also.

Twain’s hatred for newspaper work paralleled my initial dislike for teaching.  Yet our jobs taken simply to earn a living led to work we later in life thoroughly enjoyed, and afforded opportunities for writing.  Twain’s reporter instincts and ready pencil and paper allowed him to write down the notes for “The Celebrated Jumping Frog of Calaveras County”; my teaching articles were my first published pieces of writing.

I’m not proud of another similarity between Twain and myself, a touch of lazyness.  That lazyness serves us well in certain instances however.  Twain decided to use his already-written letters to create his first book, Innocents Abroad; I used a flash fiction story I wrote a few years ago as a plot for my Lego story in class last Saturday.  Actually, I prefer to call this “writing efficiently” rather than lazyness.  Let’s put everything in a positive light!

But Twain and I differ on that point.  His upbringing most likely led him to his depressed old age, while my upbringing leads me to always look on the bright side.  I just hope this silver-lining mentality doesn’t hinder my ability to write great literature enjoyed by millions.  To have the lasting impact I want, I must learn to globalize my writing without losing its colloquialism.  I don’t want it said of my writing as Engel said of Twain’s Innocents Abroad, “the humor has not held up all that well.”  Writing is too much hard work for it not to be enjoyed henceforth and forevermore!

Twain, Engel, and me.   It’s fun being in their company, if only in this paper. 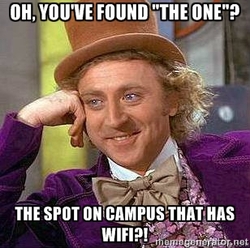 I thought surely Starbucks would have it, but alas the folks working here thought I had to be a student to use wifi here.  After fiddling around with settings, signing up on icloud, and fiddling some more, I finally got internet connection on my computer but have yet to connect to wifi on my iphone...I WILL succeed some day soon!!!
Assignment 13--Impressions of England:
I Like Hidden England Best

The things that aren’t on display at the British Library,

And people who work in the kitchens behind the smiling servers,

down a storm drain

And the coins below the Thames, and some furniture too

And the chunky peanut butter at Tesco’s

Wilda And Twain Meet IN AN English PUb by 1wilda | Make your own at www.toondoo.com
Assignment 2--Scribe Notes are in the course blog--I tried to go get them but presently cannot access our course website

Download File
A Day in the Life in England

Selbourne Village Store reminds me of Daddy’s General Merchandise, which was also the gathering place for neighbors

A chair for an author…Chawton House Library alcove, so like my writing chair at home

New friends meet at pubs, conversation like church dinner on the grounds, but with a bit of alcohol

Wear to a castle:  a skirt that sways in the breeze, white like my daughter’s prom dress when she became prom queen

Reverent moments at cathedrals, quiet prayers at home and abroad, incredible grandeur in worlds both seen and unseen